Bealtaine and the Fire of Summer 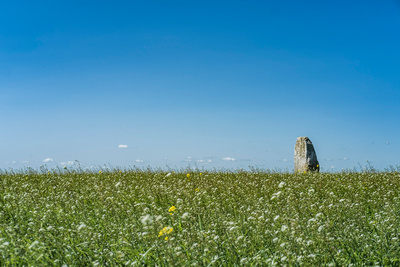 Bealtaine the ancient marker that welcomes the arrival of summer comes to us in or around the 1st of May; the celestial fire and energy of the sun empowering all of life into the fullness of the year. Bealtaine, for our ancient relatives, was a celebration, a welcome of nature's provision, and a reward for their expectations and hopes for a good outcome in the year. Their world, like our own, had its fair share of uncertainty, yet the cycle of the natural and celestial had a certainty of its own.

Bealtaine flowed from what came before. It lived in the cycle of nature and cosmic activity. That cycle included Samhain. Though Samhain sat in the grey of winter it was welcomed and celebrated. It was a marking of the latency of the winter held onto, beneath their feet there was a dance of stored energy making ready for new beginnings. Known  'thin places' in the landscape were marked, celebrated and honoured in Samhain too, as points in the realm of nature, where eternal time and mortal time embrace.

Imbolg rose up out of latency of Samhain and Spring made her entrance. Where the old year closed behind you, your feet stood facing into a new beginning, a threshold to step over. Thresholds need a ritual as a crossing point, something that is mostly lost to us in our time.

One such early ritual was taking the old Brigid's cross from the rafter of the house, pray, burn it, and replace it with a new one. This ritual act of burning the old symbolically placed all that had been the year past in that present moment. The ashes also marked a  standing place to step on into the near future, as it were. Placing the new Brigids cross in its place welcomed the new year, and also gave a place in the cycle of time to start afresh without regret. Thus Spring and a new start were welcomed, and more importantly, celebrated.

And so Imbolg yields to Bealtaine. Fires lit to help the sun, to gather, dance, recite, remember, sing and prepare for hopes to be fulfilled and listen for the turn in the season.

The Fires of Bealtaine called to mind a sense of mystery, of cosmic order or even disorder. The bonfires sometimes symbolised the 'clash' of light and darkness or perhaps good and evil. The fires had the energy to cleanse, clear the ground and prepare for a good outcome. They were a release or freedom to lay hold of what was ahead. The ritual and celebrations you could say energised hope.

We see such hope in some of the larger narratives that fed the hearts of our Celtic relatives. One such story tells of the lighting of a Pascal fire by Patrick and Fiacc on the hill of Slane, whiile the fire of sacrifice on the hill of Tara by the Druids burned. A Pascal fire that celebrated the Immanent presence and brightness of 'Son of Man' as the fires of Bealtaine flamed brightly.

Summer Sunrise on the Wexford coast.We ought to have Great Expectations

Our ancient Celtic relations had a strong intuitive and lyrical sense of their own soul's journey, not just later after death, but in the 'here and now'. Indeed more particularly in the journey of life here. The shelter of our own soul was clearly mirrored in the haven of the natural world for the heart of the Celts. There was always that ancient sense that maybe it was your soul that had the map of your future. Along with which the Celtic mind had a wonderful sense of the depth and mystery of soul. Though its presence could easily be missed as its place within felt something like the low flame of candlelight, and its voice very often could only be noticed in silence.

Poppies in a field of Summer Wheat.Summer Crops and Poppy Flowers.

Dandelion head in SummerNot a Weed, a Wild Flower, the Dandelion.

Not so much, 'Who am I ?' but more 'Who I am'. The ancient Irish word for the coat over our soul was 'Dán'. 'Your Dán', your Poetry, the voice of your time and gift, your place in the world, your destiny lived out in the ordinary space of our Presence in the here and now. The 'fire in our belly' so to speak. The transcendent already within, a flame to start a fire.

Finally, Catherine of Sienna says it well.  "Become who you are meant to be and you will set the whole world on fire"