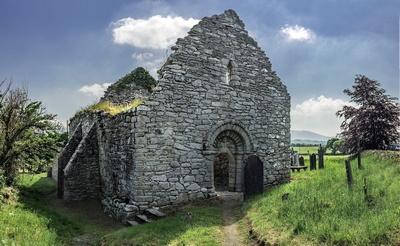 Ullard not very far from the water's edge of the river Barrow as it meanders South into Graiguenamanagh, to its tidal point at St Mullin's in South County Carlow. A few miles outside Graiguenamanagh in the townland of Ullard or Erard as it was known in ancient times. The site and church at Ullard present are mostly a 12-century structure, will a beautiful original Romanesque style constructed just before the  Gothic period. This doorway echoes similar doorways at Killeshin and indeed Myshal. We find here above our heads a couple of original carvings above the arch of the doorway said to represent St Fiachra and St Moling. However, as always this structure has for example in some of its East and South facing walls remains of the late 6th-century church. The 6th century time of great learning, and cultural connection in Ireland when the names of dynamic and charismatic leaders such as Comgall of Bangor, Edna of Aran, Finian of Clonard, Ita of Limerick, Ciaran of Clonmacnoise, Brendan of Clonfert, Kevin of Glendalough, to name just a few men and women who helped reveal the character of the Celtic Irish, their story, their literal prowess, and deep creative hearts.

Placing the Christ story as one of grace and blessing beside the story of the lives of the ordinary lives encountered Gods presence was a little like the voice and beauty of Nature, He was nearby, attentive, knowable. A God paradoxically present Immanently and transcendentally. In a sense a lived understanding that the gentle light of Celtic Spirituality gave  the variety of human hearts somewhere to retreat as a place of sanctuary and acceptance, as the ordinary and sacred living  intertwined.

Here too the oral records of the ancients were written by the early Christians to preserve it. Story, poetry, myth, folklore. The monastic settlements and communities that were established served and nurtured,  the creative, and practical needs of the communities formed around them.

Their names then did'nt carry the prefix of 'St..... that came to us from the later medieval period..they were Ita of... Brendan of........  The stronger institutional religious sensibilities and all that these gave us arrived much later in the Medieval period in Ireland. Maybe too because so much of the records were destroyed after the Anglo Normans arrived we tend to know more of the cult of the saint, and the relics associated because these find a stronger connection in the Church of the medieval period and onward in non-celtic religious belief; maybe. 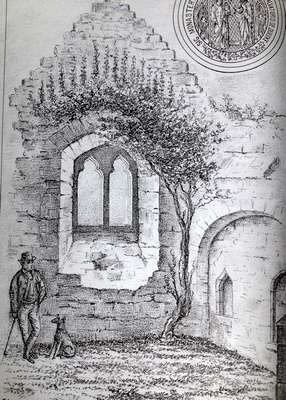 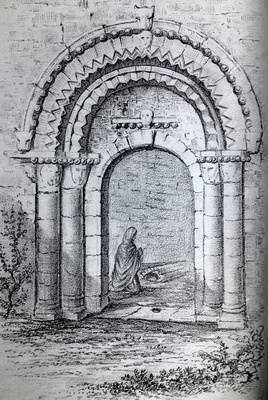 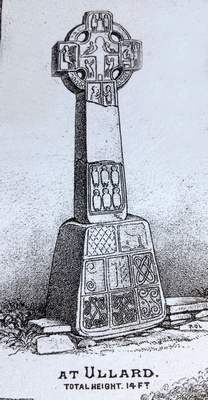 The name associated here from the Churches earliest period is St Fiachra. Fiachra was the son of St Fiacc of Sleaty near Carlow. St Fiacc it is said was a cohort with St Patrick when Patrick lit the Pascal fires at Slane as the Druids lit their fires on the Hill of Tara. Fiachra came to prominence under Comgall of Bangor, and it is said worked closely with Moling, down the river at St Mullins. It is very possible that there is a record of Fiachra finding his way into Europe following the 'music of what happens' in his soul's journey establishing a monastery of hermitage somewhere in Normandy France.

Do you and I have faith in ourselves, the greatness of our giftedness, our Dán within? 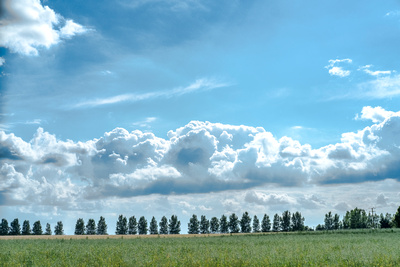 My Horizonstre horizon in Summer sunshine

What might be your horizons just now, the boundaries you set when viewing yourself, your world, God, or the reality you perceive?

Sue Alderton(non-registered)
I wonder if you know much about the neglected ruins of the little church of Kilcomb just north of Ballyduff Camolin in Scarawalsh. It was closed about 1650 and fell into disrepair. I wonder when it was built and to what St it was dedicated. Any information would be invaluable.
Andrea Doyle McCabe(non-registered)
Great read, well done :)
Nance Cale. (Australia)(non-registered)
Keith I am enjoying the tour as if I was there Thank you
Blessings
Nance
Rebekah Collins(non-registered)
Loved this piece Keith so much good information that I usually wouldn’t know about , I look forward to your next blog thanks so much x
Micheal(non-registered)
Well Done Keith another great read. Keep them coming!
No comments posted.
Loading...
Subscribe
RSS
Keywords
ireland ancient life spirituality Celtic journey divine meditation mindfulness soul
Archive
January February March April May June July August September October November December
keithdowlingphotography
Powered by ZENFOLIO User Agreement
Cancel
Continue