Just four kilometres north west from Carlow's town centre on the way to Knockbeg we find Sleaty. Standing in a small field near the edge of the river Barrow stands the remains of a 12th-century monastic site. Amongst the ruin here are two artifacts that most likely are the remnants of the early christian site from around the 5th century. One of which is an unmistakable long plain granite stone cross that stands head and shoulders above the gravestones and markers from much later times. The other artifact stands near an entrance to the main structure, a rough granite font weather-worn over many centuries, again it may had pride of place in the earlier 5th century site. The early Celtic Christian site stood mostly as a wooden structure with mortar and clay and some stone in its make up, hence no longer remains.

The 5th century landscape here as in so much of what was Ireland then was heavily forested native woodland, providing lots of raw material for much of the building needs. Within this landscape, there were no real roadways, just pathways and track, and the rivers made the essential 'main highways' to move people and  goods. This part of South Leinster was then known as Hy- Kinnselach along the river's edge.

Places like Sleaty emerged out of the woodlands as a place of rest, safety for the traveller and pilgrim. These early monasteries served as focal points not just for religious observance, they formed living communities of work, learning, writing, music, and often formed part of the path to far off destinations. Moving through such landscape over whatever distance the journey, especially for the early Celtic christians, was also a journey of heart and mind. Themselves, the landscape and all its seasons and songs along with ease for a divine presence both transcendent and immanent was essential to any journey.

Patrick and Fiacc and names associated with this little site at Sleaty. It was to become the Seat of the Bishop of Leinster in the late 5th century. However these two names while on their own pilgrimage's found themselves at Easter time, or there abouts on the hill at Slane with charge of the Pascal fire. The fires at Slane competed with the ancient druidic fires of spring equinox on the hill of Tara and its seat of the High Kings of Ireland. That competition ended peacefully with Patricks ability to entreat the Celtic hearts and minds to adopt the new faith into their already deep spiritual lives.

Fiacc remained an important figure and presence in the Landscape, Lives, and faith community in South Leinster. Based at Sleaty his reputation was one of wisdom, humility, learning and work. His name is retained as a strong identity with the local parishes at Graiguecullen and Killeshin, where the early less organised Celtic Church has strong meaning.

Reflection: "Though the human being is born complete in a moment, the human heart is never..."       Anam Cara.   john O Donohue 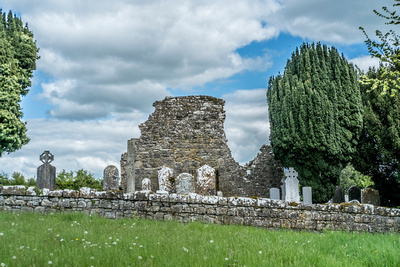 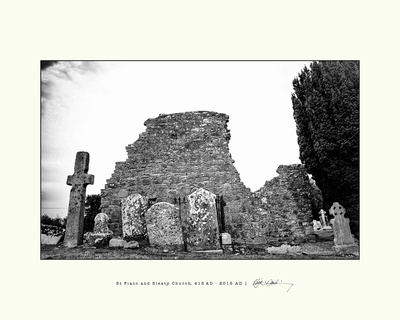 St Fiacc and Sleaty Church near Graiguecullen.Fiacc and Patrick had connections with Sleaty in the late 5th Century on its original site.